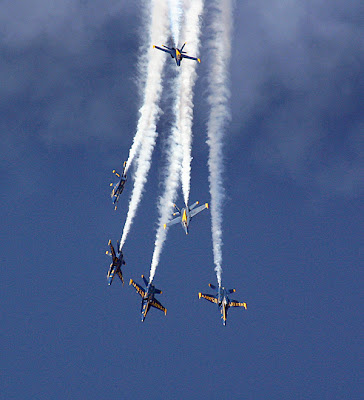 I don’t get déjà vu to often but I had that feeling looking at a picture recently. A friend sent me an email containing various views of the Navy’s Blue Angels Flight Demonstration team. I recognized some of the photos but what caught my eye was a view of the diamond breaking formation at the end of a dive. I swore I had shot it.

I have put some of my aviation pictures on line and I could see how some of my pictures could get around. I was reading a Tracy resident’s blog a while ago and saw the photo of a costumed dog I had shot there. Photos can get passed about easily so why couldn’t my Blue Angels shot be making the cyberspace rounds.

I opened my iPhoto catalog and found the Blue Angel’s performance at the Leemore Naval Air Station. Close but no cigar, the photo making the rounds was not mine.

I like my photo, as there is something special about six jets diving toward the ground in a clear blue sky. Maybe that is what some other photographer thought as they captured that pictured that was so close to mine. Maybe great minds think alike, or at least see similar features.
Posted by Glenn Moore at 8:21 PM