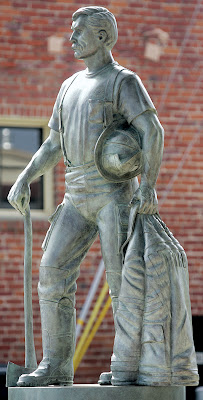 If you think it wouldn’t be too hard to photograph a statue think again. Tuesday morning marked the arrival of the firefighters memorial statue to be placed next to the Tracy Fire Administration offices, the old site of Fire Station 91. The statue is a nice tribute to firefighters, a rugged crewman axe and turnouts in hand as he waits for the next call.

The grumbling with photographers began as soon as we saw where it was going to be placed. Nice statue, pretty setting, horrible backgrounds.

Nothing can kill a good photograph like a bad background. No matter which angle I took I was confronted with a sea of pine tree branches, ugly brick buildings, utility poles and their myriad of lines it was a photographic disaster from any view. I tried anything I could think of, low angle, high angle on top of the benches, holding the camera as high as I could I just couldn’t get a clean shot.

The best look I could get was using the longest focal length lens I had, stand as close as possible and shoot with the aperture wide open to blur as much of that busy background as I could. The results were acceptable but not great.

It is a fitting tribute to our fire department’s staff and crews I just wish I could have made a prettier picture. Maybe we will get some nice background landscaping in the future, remember, it’s all about the photos.
Posted by Glenn Moore at 10:24 AM