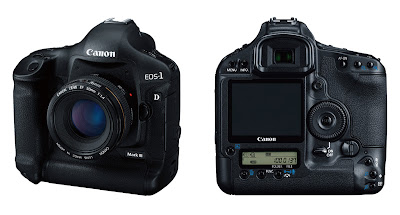 Ok, so the top-secret photo I posted of the new Canon 1D Mark III was enhanced with a little Photoshop magic but it did whet my curiosity.

Canon has taken the wraps off their new flagship camera with a press release boasting it’s features including 10.1 million megapixels, a 10-frames-a-second motor drive capability and a self-cleaning system for the image sensor.

The official photos of the camera show a sleeker camera body with fewer buttons and a larger rear LCD screen. The LCD screen is touted with having a live viewing capability akin to some smaller point-and-shoot digital cameras.

I have seen listing for its suggested retail price from $5,200. To $3,900 so we will have to see what the market sets for its April release.
Posted by Glenn Moore at 6:45 PM

Heh, you're a funny guy, I didn't take a close look, I totally thought it was an actual pic of a new camera. So all of the functionality will have to be accessed via menus and a gui on the screen. I think I liked the buttons better