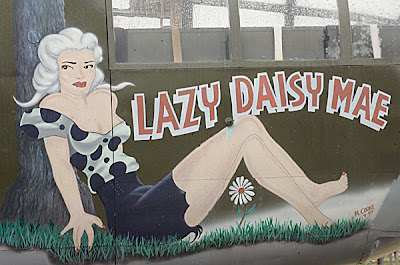 I was taking pictures at the Castle Air Museum near Merced this weekend with a friend and I found a curious sight. Painted on the side of Mitchell B-25 bomber was a curvy model reclining on the nose of the bomber.

Most world War II aircraft were adorned with such nose art, some were cartoon characters, some were women in much more provocative poses than this but what struck me odd was the painting of “Lazy Daisy Mae” bore a striking resemblance to the recently departed Anna Nicole Smith.

Maybe it was just my imagination or the fact that her picture appears daily on almost every news program but I knew I just had to snap a photo of her. I am sure it was coincidence but you never can tell.
Posted by Glenn Moore at 12:32 PM