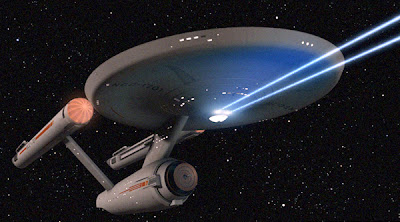 I grew up watching the original Star Trek series with my brother and I must have seen every episode at least 100 hundred times. So there I am flipping through the television channels one weekend and I see the familiar sight starship Enterprise gliding through space on in its ongoing reruns.

But something wasn’t quite right. The show looked the same but it wasn’t. Could my memories have faded like the 35 mm film the show was shot on? Not exactly. In this world of digital imaging it was just a matter of time as CBS Digital Studios have begun the remastering of the show.

Dubbed “Star Trek-Remastered” crews have been hard at work cleaning the original 35 film copies of scratches, and dust specks, bringing the colors back to a vivid level and preparing the episodes for high definition presentation.

Among the changes is the digital creation of visual effects and digital versions of the matte painting used for backgrounds. The Enterprise itself has been digitally recreated from measurements of the original model.

The new digital effects are stunning and even the simple shots of the starship firing its weapons have a new photorealism from the digital artists.

It was just a matter of time in this world of Photoshop, Adobe Illustrator and other computer graphics programs that someone would try to improve upon old television shows as we can adjust and manipulate photos.

Is the remastered version better that the original series? I like to think in terms of it enhances the original show. A little bit cleaner, a little bit brighter and a little bit clearer all around. In this day of digital creations the sky is no longer the limit as we now can take flight into the deepest of regions of space. My childhood memories are still their, just remastered.
Posted by Glenn Moore at 3:35 PM

I don't know, I tend to think such digital foolery is akin to making old vinyl records sound like CDs. Sure, it's clean-sounding -- but also antiseptic. You lose a little bit of the warmth and the character of the original.
Then again, it is science fiction, so maybe it's just meant to be.