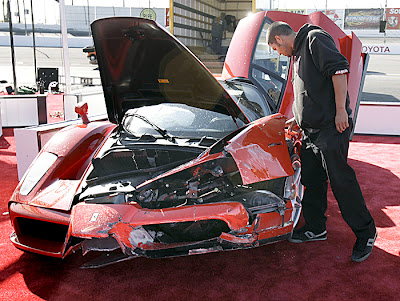 I don’t like to go accidents, but I would have loved to cover this one. This photo by Associated Press photographer Nick Ut is of the damage done by actor-comedian Eddie Griffin when he crashed a Ferrari Enzo into a concrete barrier while practicing Monday for a charity race to promote his upcoming film, "Redline.

The car is valued at $1.5 million but since no one was hurt it is considered a property damage crash, or what the police here would call an “11-82”. We don’t cover calls on the scanner when they come out as “11-82” but I would have made an exception for this one.
Posted by Glenn Moore at 5:51 PM