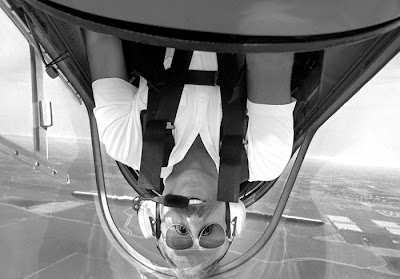 I have to admit I took a twisted pleasure watching an online video of a newspaper photographer struggling with a demonstration flight with the Untied States Navy Blue Angels.

I have to say I was a little jealous when I saw him seated in the back of the #7 jet for his hour-long flight. I have dreamed of the chance to fly in a fighter jet and feel the power of an after burning jet engine propelling me along at near supersonic speeds.

It looked like a fun flight, if you don’t count the one time he puked and the two times he passed out while pulling g’s all captured by the camera imbedded in the seat before him. Nice how video of a photographer losing his lunch on assignment can make me smile.

I remembered my lone aerobatic assignment years ago. Flying in the front seat of Czechoslovakian Zlin 526 airplane I was treated to loops, rolls, inverted flight and a hammerhead stall turn. I am proud to say I kept my breakfast down during the flight but we were traveling much slower speeds than the Blue Angels F-18 Hornet fighter jet.

If you look closely at the picture you can see my reflection in pilot Steve Stavrakakis’ sunglasses as we cruised upside down over Stanislaus County.
Posted by Glenn Moore at 10:34 PM