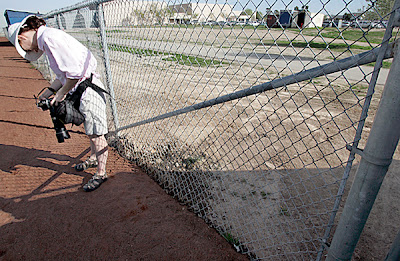 Everyone knows real estate is a prime commodity in Tracy but I didn’t how important four feet of ground could be.

I was shooting a West High baseball game today along side a photographer from another newspaper when the umpires stopped the game. A five-minute meeting was held and I knew we were the topic of debate with the looks and gestures directed our way.

At the end of the meeting we were told we could stay on the field but were restricted to an area from the edge of the dugout gate to the first vertical pole in the fence line.

As the game progressed the umpires made some call that were questioned by the opposing team’s coach. The coach brought up the fact that the umpires were more concerned with the photographers on the field than the game at hand. Nice to be an unwanted center of attention.

I asked one of the assistant coaches who had complained about us and was told the umpires just questioned our presence. The rule is we are allowed on the field but must be in a designated spot that is considered out of play. I am used to that, just not the attention that today’s game drew.
Posted by Glenn Moore at 8:46 PM