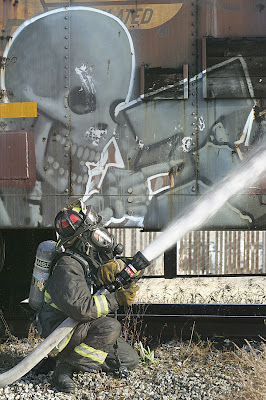 One thing that 16 years of photojournalism has done to my shooting is that I sometimes think my artistic creativity has dwindled. Going after the hard news shot, the story telling image I sometimes think there isn’t much room to show the artistic side of my photography. I guess sometimes I have to try a little bit harder to take a cool photo, even at a fire.

I was looking through the photos I had taken through the year and I came across this shot from the boxcar fire that raged on the rail lines off Sixth Street.

I had labeled this shot as “box car arson fire5” one of seven images I turned into the editors that day. This particular shot of a fire department captain fighting the fire near a section of graffiti on the burning car was never published.

I had shots of flames rolling out the car, the thick clouds of black smoke pouring over the firefighters, all told the story well. This shot however was a little different. This picture alone you really couldn’t tell where or what was on fire. But with others it told more of a story of the car that was burning, how it was covered with graffiti and an eyesore long before the fire.

I really like the shot; I am pleased I actually took the time to frame the skull looming over the fireman. It may not be a great news photo but it certainly is one of the most creative fire photos I have taken in a long time.
Posted by Glenn Moore at 9:34 PM

Your right it is artistic and I like it but then again the source of this comment is questionable. Another photo lover