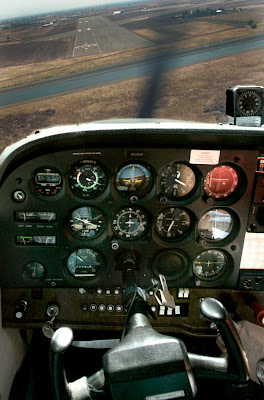 I was roaming the Apple Computer homepage when I came across a link to a new documentary movie. The site was on the Apple page because it was made entirely on Macintosh computers. But what caught my eye was the subject, civil airport aviation.

Brian J. Terwilliger captured the adoration of flying with his movie “One Six Right” starring the people and planes of the Van Nuys Airport in southern California.

The documentary discusses both the love of aviation and the plight of the local airports which he reports closing at a rate of one per week in the United States. It is fascinating topic and deserves a viewing.

Looking at the site I could help but think of our own airport located just to the south of town. I have had many assignments there and above Tracy with local pilots flying from those two runways. I would hate to think of a time like in the photo above when we could no longer roll into final approach to Runway Zero Seven Tracy.
Posted by Glenn Moore at 3:34 PM

Can any good thing come out of Van Nuys, Ca? Maybe not many planes, but Danielle Beth MacMurchy was born there. Her brother too, so give a shout-out for Van Nuys!

Sorry about the personal reference, but just couldn't reist.