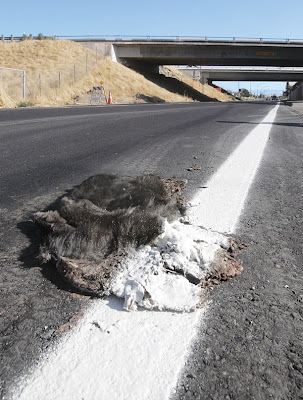 It may be hard to look back at year’s worth of photos and try to decide what the best image was. But it was pretty easy to look back and see which one was the most hated. A picture of the sad demise of a cat on a stretch of Corral Hollow Road became my most infamous picture of the year.

A business owner called me one day to tell me of cat outside his business that had the indignity to have a fog line painted across him after his untimely end. I took a photo that showed the path the striping truck that never swerved away to avoid the carcass in the road.

Readers did not appreciate the appearance of the flat cat, which I referred to as “Mr. Fluffy”, in the paper. It did not help that a few weeks earlier we had published a picture of a cow that died in the summer heat wave. Readers were not happy with the parade of dead animals on our pages.

Although the photo might have offended some it did persuade the road crew to remove the cat and repaint the fog line.
Posted by Glenn Moore at 2:23 PM

How could you? OK, so it's only fair that you put your NICE animal photo from yesterday on your blog.