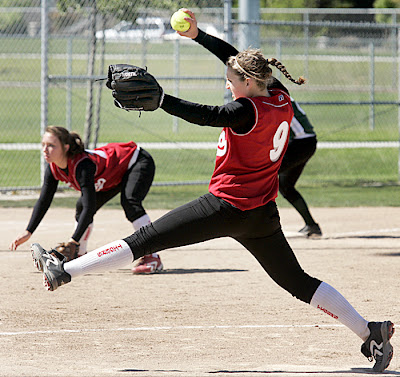 Most photographers know half the battle of getting a good photograph is getting in the right position to take the picture. The right spot, the right lens on the camera always gives the right picture, right? Wrong! There is no right picture. It all depends on the angle you want to take.

Take this softball pitcher at a game I was covering today. What was the right angle to photograph her from? The answer is what did I want to show.

Both of these photos were shot with the same lens, a 70 -200 mm with a 1.4x extender attached. Exposures were nearly identical but the angles were vastly different. I first shot the side view, cropping in to just capture her windup and leg kick. It is a nice shot and shows the power of her stride toward the batter. 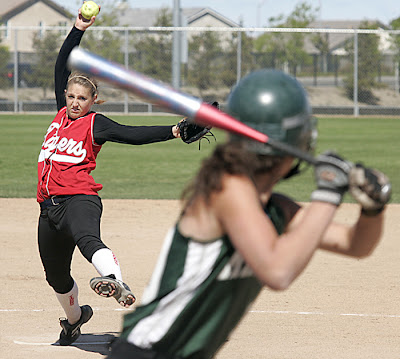 For an entirely different look I shot the same pitcher head on at just about the same point in her delivery. Shooting through the backstop fence I put the batter in the frame. The batter lends several things to the picture. It gives a sense of depth; there is a distance you can see between the pitcher and batter. Shooting at a larger f-stop keeps the batter pleasingly out of focus to keep attention on the pitcher. The batter also gives a balance and symmetry to the photo lacking with just the pitcher alone.

Which is the better photo? They each have their own story to tell, the each have their own unique visual interest. Which one will the paper use? Hard to say, it might come down to which shape works better on the page with the other photos. Both tell the same story from a different view, it all about taking a look from a different angle.
Posted by Glenn Moore at 9:14 PM