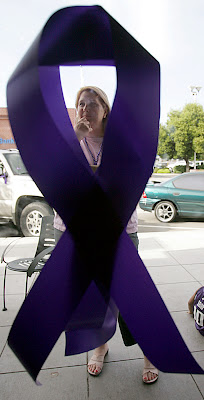 Volunteers were hard at work Monday setting up purple displays around downtown as they prepare to show their support for the battle against cancer with the May Day for Relay event.

After being snubbed by the city council in their bid to join the national day of cancer awareness citizens and merchants were urged to display the color purple to show their support for those in the battle against the disease.

I caught up with this group at Barista’s as they were finishing their decorating of the windows and door.
Posted by Glenn Moore at 9:46 PM