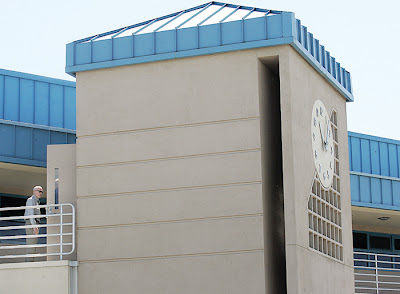 I missed last Friday's lock-down of the West High campus, as I was assignment to shoot Site 300 in the hills southwest of town. Murphy's Law struck as spot news broke out while I was too far away to even know about it.

Someone left two notes with bomb threats at the school, rattling nerves in the aftemath of the Virginia Tech tragedy. Better safe than sorry, as the campus was checked and the area secured for any dangers.

Then Monday came, and a new threat against the campus emerged. This time it wasn't veiled threats posted on campus walls but a specific target posted as a comment in the Tracy Press web site. The comment said there were still two bombsat the West High campus, including one in the watch tower.

I was sent out to see what was going on as the editors alerted the district to the posting, which was taken off the Web site. At West High, I found a campus going about business as usual. I took shots of the tower as students and faculty gave me quizzical stares. I returned to the office and was told that bomb-sniffing dogs were being dispatched. 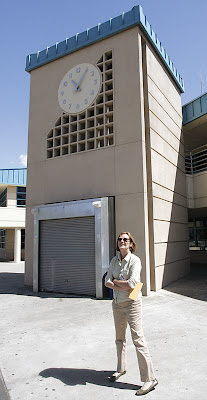 So I returned to the campus, this time with Tracy Press editor Cheri Matthews. Same thing this time. No access restrictions, no tape to keep students or onlookers away, not even one campus security officer to steer people clear of the threatened tower.

Cheri and I walked around the tower, photographed it and finally sat down and waited for anyone to show up. District personnel, including the superintendent arrived, and gave the tower a cursory exam.

I realize now that the comment was a hoax, but in these times, it seems better to be safe than sorry and at least keep students from the area until the danger is proven false. I was surprised by the almost-nonchalant attitude regarding the online threat.

In the end, a cruel and mean-spirited prank drew the Tracy Press into the story and left me wondering why some threats are taken seriously and others aren't.
Posted by Glenn Moore at 6:43 PM

Amazingly, the comment on the TP website ended up as the front page, above the fold headline on the competing daily paper in town! Seems alot of people are now looking at the tracypress.com website and the comments