A lesson on life and death 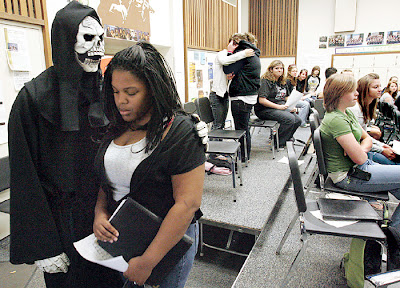 I am no expert on life and death, but I have seen both on the side of a dusty road. I photographed as the twisted remains are cut away from a car to free the occupants. I have seen parents arrive at their children’s accident scene just in time to see them carried off in helicopters. I have watched as they weep in the roadway after identifying their bodies. It is something you pray to God you never have to see in your lifetime, and thankfully most people don’t. 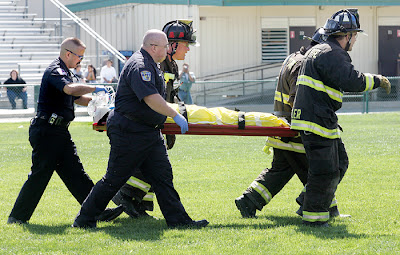 The major accidents I go to are all starting to look the same, a collection of crumpled sheet metal and noise. I’m used to it by now and as I walk around the bits of broken glass and taillights, avoiding the puddles of anti freeze and blood in the road I take my pictures. The pictures I take that appear in the paper are so antiseptic; they could never convey all the sights and sounds that make an accident scene.

In an attempt to help teens realize the dangers of driving under the influence of alcohol a program called Every 15 Minutes brings all the sights and horrors of a fatal accident for them to witness. Today’ simulation was at Tracy High with students playing the part of the drunk driver and accident victims. 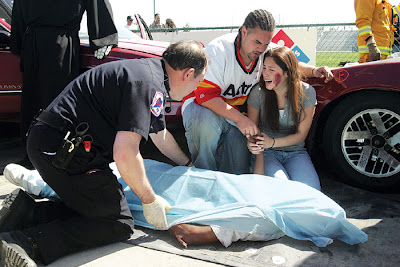 As part of the program a student is removed from class every 15 minutes to show the loss of life by drunk drivers across the United States. As the Grim Reaper led the last deceased classmate out other students wept at the thought of her loss. The dead students gathered together at the scene of the wreck and silently watched the crash rescue attempt unfold. It was all a little eerie to see.

Was it a realistic crash? As much as it could be. At a real crash as soon as a news photographer arrives the body is covered and set aside. It sounds cold but the living need more attention. The accidents I have been to seem noisier, more debris everywhere and generally more tense of a scene. You learn to work not talking to anyone, hope no one yells at you for photographing someone crying over the dead friend and hope you can find a photograph from the shoot that doesn’t have a body part in the frame. 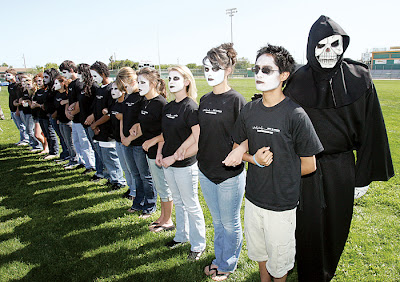