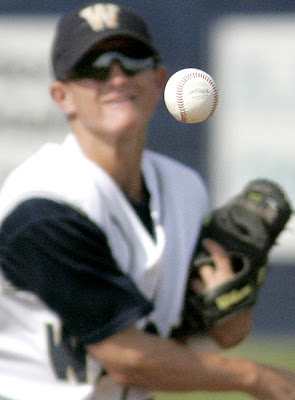 The scary thing about this baseball picture is I wasn’t even trying to focus on the ball.

I was shooting a West High baseball game and he action wasn’t very exciting. I was focusing on the base paths when a sharp ground ball headed toward the West High second baseman.

I was shooting with a 300mm telephoto lens with my new 1.4x extender on. That gives me the effective focal length of 546mm shooting with an Eos 1D. I caught the second baseman just after he scooped the ball up pulled the focus hard and held down the motor drive.

Now as a rule I never shoot with the camera’s built in autofocus mode. I just don’t trust it. I prefer the old school focusing ring and good twist to get the image sharp. But on this picture I was off; bad timing, too much pull in the focus it was a miss.

Back at the office I was editing my shoot and something just didn’t look right on the thumbnail screen image. I called up the full size image and saw that the player was way, way out of focus, but the ball was clear. The stitching on the seams to the lettering on the ball was tack sharp.

I could lie and tell everyone I meant to focus on the ball but who would believe that line. It is a quirky stroke of luck, too far off on the focus on the player and the motor drive sequence managed to capture the ball as it crossed the plane of focus.

I knew it would never make the paper but it is still too cool of a picture and honestly, it is probably the best shot from the game.
Posted by Glenn Moore at 7:52 PM

Cool shot ... whether it made the paper or not!

I think it should run in Our Town!

what a cool shot!