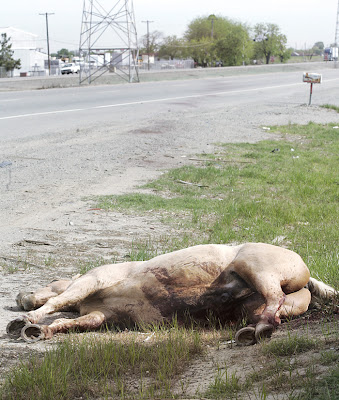 As soon as I took the call in the newsroom I knew I was in trouble. A reader called to ask about the dead horse she had seen in the road on 11th Street near the entrance to Interstate 5.

I asked the editors what they wanted to do. Did they want me to go out and photograph it? I remembered the reaction to past photographs of dead animals in the paper and I was leery about the prospects that this would bring. The decision was made and I head out to look for the horse.

I found the horse near the Kasson Road intersection slaying in the shoulder of the road. It was long dead and long trail of blood led from the body across both eastbound lanes of 11th Street.

I did the best I could to be unobtrusive but it is hard not to be obvious while you are photographing a dead horse by the side of the road. I kept the photos as tasteful as I could trying to tie the road in as much as possible.

Later I was told we would not be using the pictures, that was fine with me but I was very surprised to see a picture in the Thursday paper. I braced for the onslaught of angry calls and letters about the picture and waited. Surprisingly, none came.

The now infamous dead cow front-page cover and the flat cat photo drew reader’s ire and we were barraged with letters and calls in protest. I am not sure why the horse picture did not generate the same outrage. On assignment I heard people talking about the photo most seemed curious what damage the car sustained in the collision.

It is sad to see the accident claimed the life of the horse, thankfully the driver walked away unhurt, it could have been much worse. I think we needed to cover the story to remind readers that there are road hazards in the rural part of our town. I am glad readers seemed to have accepted our coverage as professional and newsworthy. Hopefully there won’t be too many more photos of dead livestock to shoot. I can live without that assignment for sure.
Posted by Glenn Moore at 7:17 PM