Remembrance of the suffering 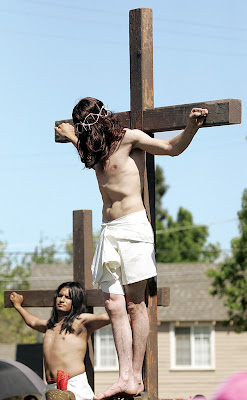 In the late 1950’s there was a television show called “You Are There” which brought the home audience reenactments of famous historical moments. Viewers could watch the Boston Tea Party, the explosion of the Hindenburg or even see the assassination of Julius Caesar.

I saw one such historical reenactment today as I joined Christians across the country and across the world observing Good Friday services. In the small town of Patterson the Sacred Heart Catholic church there held a Passion play.

The Passion refers to the suffering Christ endured as he was tried and executed by crucifixion on a Friday afternoon. Churches and other groups have strived to show the pain and suffering he endured as he was marched carrying the cross to his death on the hilltop of Calvary.

Patterson’s Passion play put on by the Nueva Aliansa Juvenil was to say the least disquieting. Roman soldiers clad in armor stood guard as the white robe clad man portraying Jesus was paraded before the crowd for his trial. It was all a little to eerie as I photographed the procession as it made its way through the streets of Patterson. 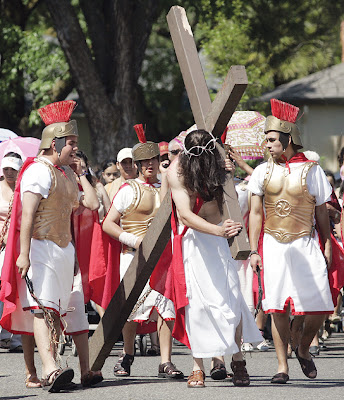 Juan Barrajas playing the role of Jesus carried the cross as the crowd followed close behind on the way to the church. I tried my best to stay ahead of the group as I photographed their procession. Guards following Barrajas swung their whips repeatedly on him as he fell in the roadway. It was all just a little to real looking as they beat him on the ground.

Looking about the crowd the faces were a mix of sad and quiet as they watched the progress to the church. Amid the wailing of the actors you could hear children cry as they got caught in the moment. A little to real to be comfortable. Arriving at the church the actors portraying Christ and the two criminals were placed on crosses and raised into the afternoon sky. The crowd was silent as we watch the guards hammer stakes into the ground at the base of the crosses to secure them in place.

The play continued; guards played dice for his robe, the women wept at his feet and finally his head slumped down as he died on the cross. The crowd fell to their knees and prayed and the play was over.

I couldn’t help but wonder if this is what it looked like thousands of years ago on that hilltop, crowds standing by, the muffled sobs the glaring heat. It seemed so out of place to watch and photograph between the residential streets, cars parked by the curb, a man carrying a cross to his death. It was unnerving to watch but I could not imagine what it would have been like to really have been there and witness the Passion of Christ. 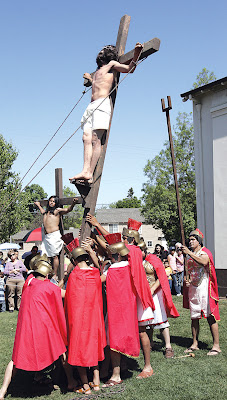 thank you, Glenn, for featuring this.
It is both uncomfortable and disquieting.