The Year in Review: Shoe shines 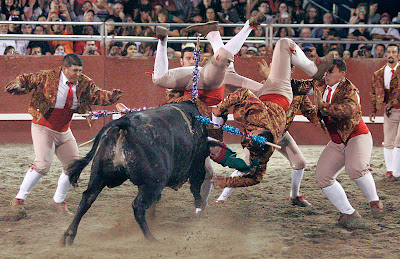 When a hockey player takes his sweaty, stinky glove and shoves it into his opponents face it called giving a "face wash."  I had a new term shooting sports this year, I call it the "shoe shine." 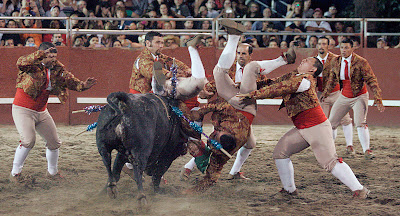 Covering the annual bloodless bullfights at the Portuguese Hall during the Festa celebration I caught the forcado suicide squad members getting taking for a ride by the bull.  As two of the forcados hung on for dear life another rushed in to help only to be greeted by a boot to his face.  Such are the perils in the bullring.

So thinking one kick in the face was great I was overjoyed when I got a second face kick at a playoff soccer game.  A West High player was greeted with a cleat to the chin as he tried to get in the way of a pass.  No  one was hurt and I never even saw so much as a yellow card.  Anyway I had a cool shot and something that showed the physical intensity of the playoff game.
Posted by Glenn Moore at 10:27 PM