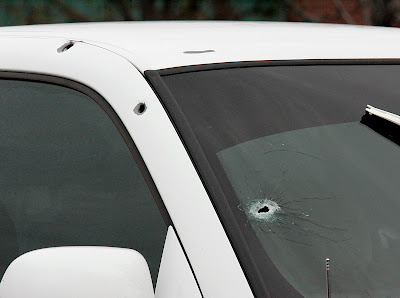 Why?
That is the question that has echoed across the nation today as we mourn the loss of life in the school shooting in Connecticut.
No one can fathom a reason as to why anyone would walk into a school and kill children, it is beyond comprehension and my heart goes out to the victims families and the community grieving their losses.  Standing at the entrance to El Pescadero Skate Park at Parker Avenue and Grant Line Road today I asked the same question, why, as police officers began examining a shooting scene there Friday afternoon. 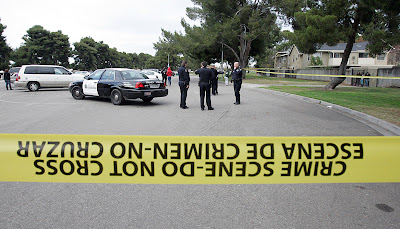 Early police reports say a man on a bicycle and a man in a two-door truck opened fire on each other in the parking lot of Tracy Interfaith Ministries which sits at the entrance to the skate park.  Several shots were fired with the truck being struck at least four times. A person in the truck received a gunshot wound and was driven to Sutter Tracy Community Hospital. The truck sat in the parking with the bullets holes including one in the windshield marking the gun battle's violence. 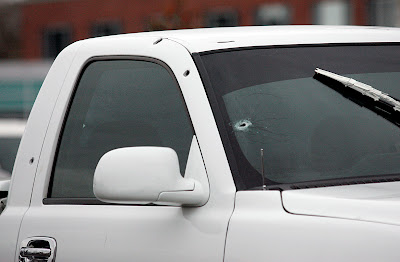 Why they would begin shooting in the parking lot where nearby kids play on skateboards? Why would they open fire next to the building that serves families in need with parents pushing their children in strollers pass by? Why would they open fire next to an apartment complex? Today's shooting at the park could have ended in tragedy with innocent bystanders being struck by the gunfire so we as a community should count our blessings and consider ourselves lucky.  But why the violence? What could possibly have driven matters to such a senseless conclusion? 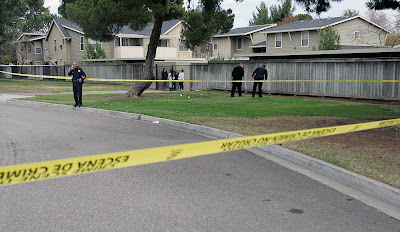 I wrote a few days ago about my life behind the crime scene line while taking a look back at this year's events.  It is sad that I find myself yet again behind the crime scene tape for some senseless act.  I won't debate the gun control issue, whether it could have made a difference here, in Connecticut, Stockton or any of the other cities beset with acts of terror and murder with a gun.  As long as there are people with a lack of moral character, hatred and no sense of right and wrong there will violence.  It seems like sometimes all we can do is just ask why and mourn our losses.  Maybe part of the why is to realize how precious life is and not take any of it for granted and to join together as communities across this nation to rise against the tide of hate and anger that drives these actions.

I don't think we will never know why to any of the answers, even if we do the answer will fall far short of easing our pain and grief.  I just hope for a time where we never have to ask that question again.
Posted by Glenn Moore at 9:32 PM