When I look at this picture all I can think of is Robert Shaw’s speech in the motion picture “Jaws”.  He describes being in the water after his ship the U.S.S. Indianapolis is sunk by a Japanese torpedo attack in World War II.  It grows quiet in the room Shaw tells of the shark attack:
“sometimes that shark looks right at ya. Right into your eyes. And the thing about a shark is he's got lifeless eyes. Black eyes. Like a doll's eyes. When he comes at ya, he doesn't even seem to be livin'... 'til he bites ya, and those black eyes roll over white and then... ah then you hear that terrible high-pitched screamin'. The ocean turns red, and despite all your poundin' and your hollerin' those sharks come in and... they rip you to pieces. “
Anyhow meet Teddy! 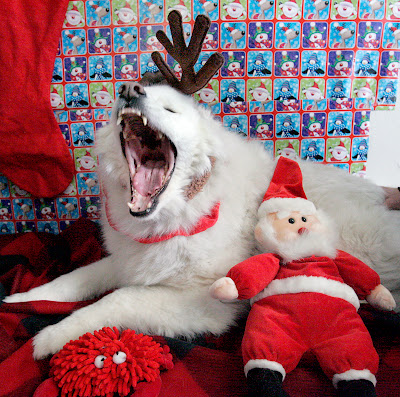 Teddy was our less than willing subject for the annual holiday edition of the pet of the Week, where once a week shelter staff pick a dog or cat fresh out of the quarantine cages for me to photograph.  The holiday pet of the week gets a cute costume, a nice backdrop for the picture and a year of ridicule for having to wear antlers for the photo, but I am getting ahead of myself. 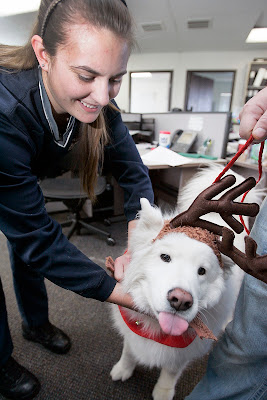 Teddy is a five-year-old Samoyed in need of a home for Christmas.  To give him a chance for adoption at the holidays he must endure a pain worse that neutering (wait, too late he was neutered already), the humiliation of the photo shoot we affectionately call “dressing the dog.”
Actually it’s more of a chance to see how far we can go concocting a strange holiday scene with an uncooperative animal for a small picture in the paper.  Let’s get that holiday spirit rolling. 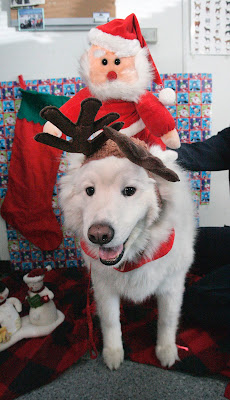 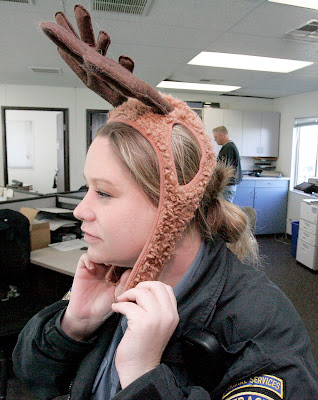 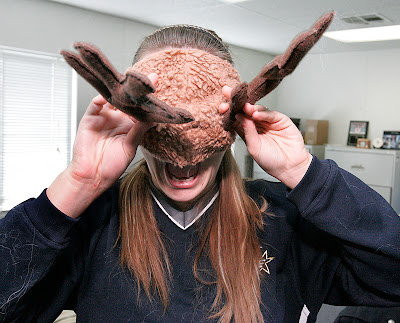 Ok all the rules are out of the way so just how are going to humiliate, errr I mean photograph this dog?  Some kind of jingly bell collar and a well-used antler hat comes to mind.  Teddy didn’t want any part of the antler hat and since we are were out of staples and I couldn’t find the hot glue gun we just tied it on as tight as we could and hoped for the best.  Next was a beautiful scene with snow and presents and a warm Christmas cheer glow just oozing good tidings and joy.  Since we didn’t have that we plopped Teddy down on a cotton pad next to the bathroom with some wrapping paper taped to the wall. 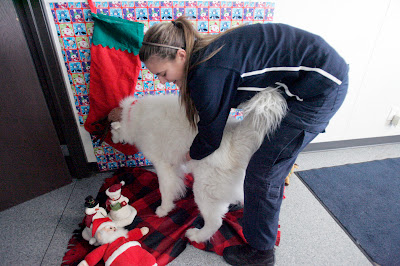 Everyone say fa-la-la-la-la.  Ok all the Christmas caroling crap is out of the way.  Let’s get shooting.  Teddy was easily distracted, looking at visitors, the singing snowmen decorations or wondering where his balls went.  But the one thing Teddy liked was Santa.  Oh yes, he loved Santa. 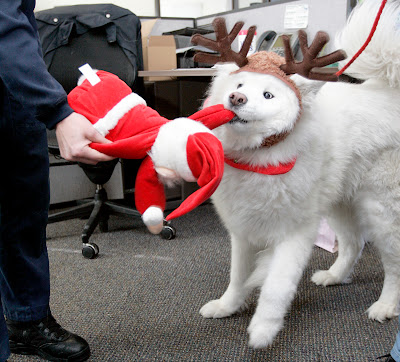 Teddy loved Santa, or more accurately loved trying to tear Santa apart.  A small stuffed Santa became the target of Teddy’s Yuletide activity as he chomped down on Santa’s furry red suit with those huge white fangs and shook him viciously.  All I could think of was Teddy was most definitely on the naughty list after that.  Teddy would run around the room with a limp Santa hanging from his mouth.  Occasionally he would spit him out only to get a better grip on him with those pearly whites. 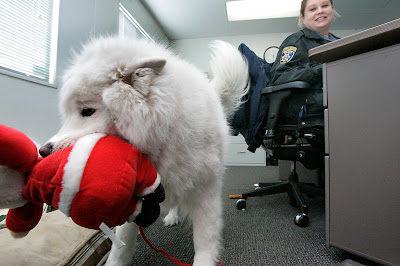 Eventually we were able to corral Teddy into one spot long enough for me to grab a quick shot of him looking menacing for his holiday portrait.  Then it was back to mauling Santa with a gusto usually reserved for biting photographers. 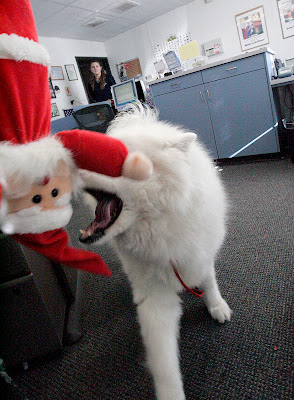 Anyhow if you are looking for a big white dog that seems friendly enough unless you force antlers on his head and smack him in the nose with a stuffed Santa then he could be just what your looking for.  Teddy and other fine dogs and cats in need of a new forever home are waiting for their chance at the Tracy Animal Shelter on Arbor Road. 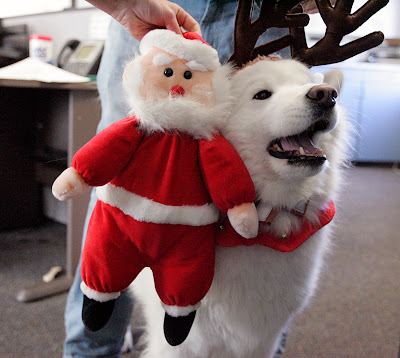 With Teddy happily going for a walk and all my camera gear in one piece I headed back to the office to make Teddy a star for a day.  Maybe he will make a family’s home a little merrier this Christmas.
Happy Holidays, Merry Christmas and a Happy New Year to everyone! 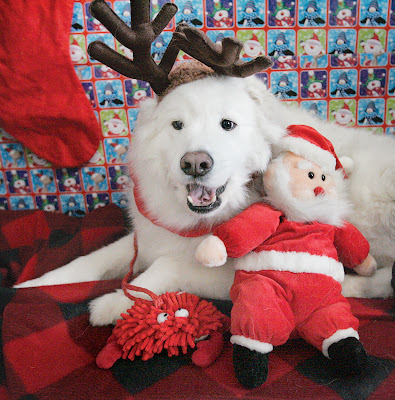